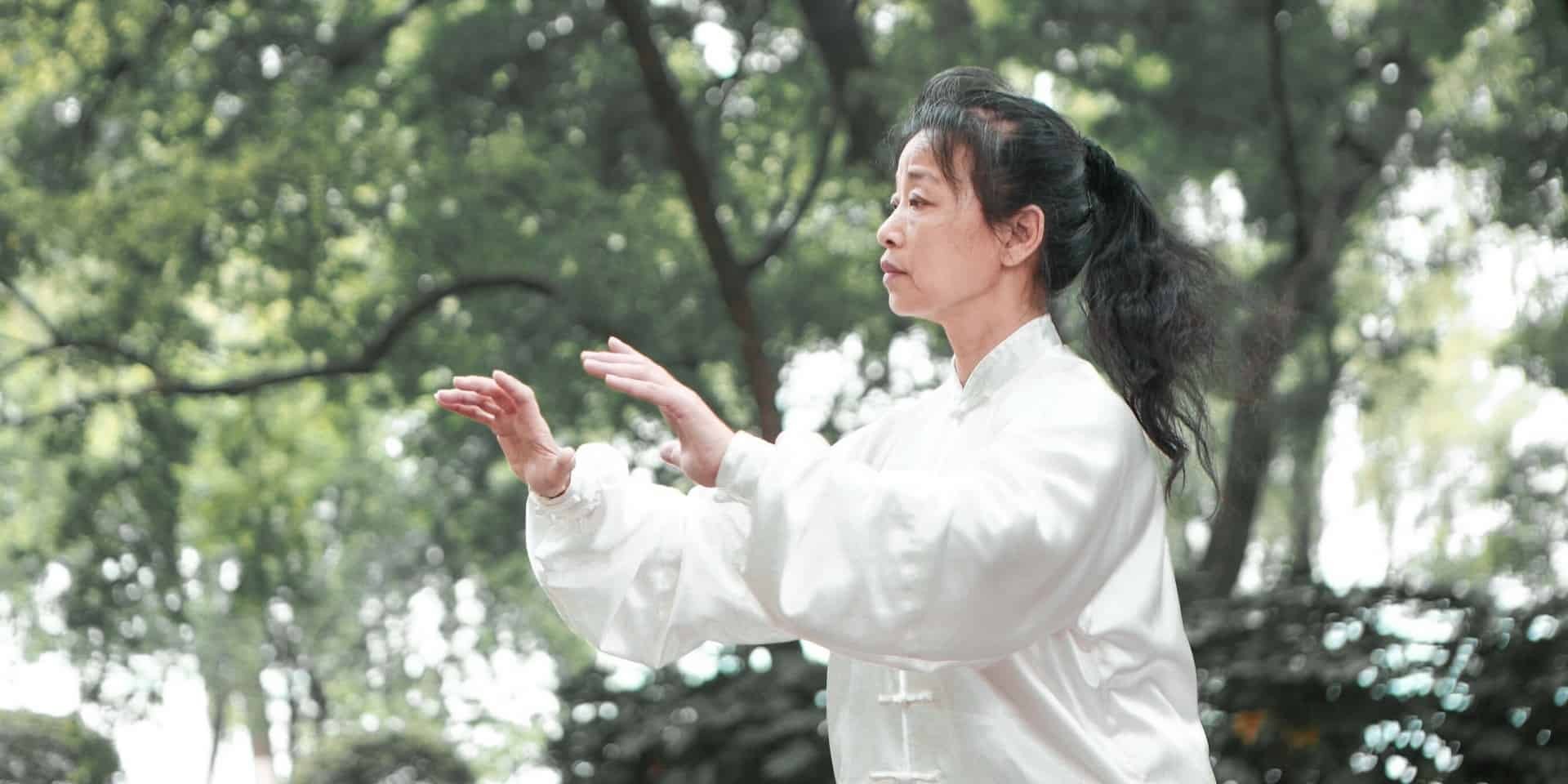 Maintain and improve your muscle strength, flexibility and balance

How can Tai Chi nourish you?

Tai Chi, also known as shadow boxing, is an ancient Chinese healing/martial art that combines martial art movement with Qi (vital energy circulation), breathing and stretching techniques. It can offer both physiological and psychological benefits and improve quality of life.[1] There is a growing body of carefully conducted research for Tai Chi as a complementary therapy to support standard medical treatment for the prevention and rehabilitation of many conditions commonly associated with age.[2]

Based on techniques from thousands of years ago, Tai Chi was developed by Chen Wangting around 1670.[3] His style of Tai Chi, known as Chen-style tai chi, is characterised by contrasting and complementary movements – slow and soft versus fast and hard. It contains explosive power and low stances, and can be physically demanding.

About 150 years later, in the early-mid 1800s, a man named Yang Lu-chan learned this Tai Chi from the Chen village. He later modified it with higher stances, gentle and slow movements, making his style a good starting point for beginners. Yang-style Tai Chi is the most popular style practised today.

From the Yang and Chen styles, three other major styles developed[4] – Wu, Wu (Hao) and Sun. Each of these styles share similar principles, but contain different features and characteristics. Sun, the latest style, is reported to be the most suitable for people with arthritis.[5]

Globally, more than 300 million people[6] practise one of these five styles of Tai Chi.[7] The discipline’s popularity is enhanced by the fact that, as each style can be modified to suit personal goals and fitness levels, practitioners are not limited by age or physical condition.[8]

A growing body of evidence[9] suggests Tai Chi provides a number of positive effects – from improving balance and building strength and flexibility, to relieving and managing psychological issues such as depression, anxiety and stress.

Improved balance and muscle strength among older people is of particular note in light of statistics that show at least one-third of community-dwelling people over 65 years of age fall each year,[10] with one in five requiring medical attention and one in 10 involving fractures.

Research findings also suggest that practising Tai Chi may reduce pain from knee osteoarthritis,[11] help people cope with fibromyalgia and back pain,[12] and promote quality of life and mood in people with heart failure and cancer.

Other findings suggest improvements in hypertension and cognitive performance,[13] as well as better posture[14] and a greater sense of calm and tranquility.[15]

It is also worth noting that a further advantage of using Tai Chi to treat or augment treatment of certain issues, such as major depressive disorder, is that it is safe and not associated with the adverse events[16] commonly seen with pharmacological agents.

Tai Chi may assist in relieving symptoms related to:

What to expect from a Tai Chi session

To some extent, your experience will depend on what style of Tai Chi you opt to try – Chen, Yang, Wu (Hao), Wu or Sun.[17] Some styles require learning long sequences of movements (possibly hundreds of movements), while others involve shorter series (a dozen or fewer movements) and put greater focus on breathing and meditation. It is a good idea to find an approach that matches your interests and needs.

Whichever style you choose, it is wise to dress comfortably in loose-fitting clothes that allow for a range of motion. You can practise barefoot or in lightweight, comfortable and flexible shoes.[18] Tai Chi shoes are available, but you likely already have a pair at home that will be suitable. Choose shoes that will not slip but that have relatively thin soles. Running shoes are mostly unsuitable.

Tai Chi classes usually begin with a warm-up. Easy motions, such as shoulder circles, turning the head from side to side, or rocking back and forth, help you to loosen your muscles and joints and focus on your breath and body. Move in a direction from head-to-toe or toe-to-head,[19] with no static stretches.

Beyond this, expect to follow instructions as you learn and practise low-impact, slow-motion, non-stop exercises. As you move, breathe deeply and naturally,[20] focusing your attention on your body. Movements are usually circular and never forced; muscles are relaxed; joints are not fully extended or bent; and connective tissues are not stretched.

Sometimes, the focus shifts away from movements and on to a few minutes of gentle breathing. The idea is to help relax the mind and mobilise the body’s energy.[21] This may be done standing, sitting or lying down.

As with any exercise or wellness program, please consult your medical professional before starting Tai Chi. If you have an injury or other health condition, seek medical advice regarding your suitability. Also discuss any concerns with your Tai Chi instructor, who can address these and customise exercises to suit your requirements.